In YESTER:NOW, Nazis and hippies, peace signs and Bluetooth symbols, demonstrations and state authority, religion, pop culture and politics, punk and musicals meet on the same terms in the same space to experience their “15 minutes of fame”. Signs with slogans from protest culture, pop, nonsense, politics and high-tech tag the present; the revolt becomes a lifestyle, the content turns into a catchphrase. Six dancers create a swarm, a cluster of sampled movements, from which individual bodies continuously manage to escape. The attempt to cope with the vast complexity of world affairs produces a mixture of simplifications and showbiz attitudes: subtlety is a thing of the past – it's showtime, baby!

A production of Moritz Ostruschnjak. Supported by the cultural department of the City of Munich and the BLZT, Bayerischer Landesverband für zeitgenössischen Tanz, aus Mitteln des Bayerischen Staatsministeriums für Wissenschaft und Kunst. In cooperation with Gasteig München GmbH. Developed in residence at TROIS C-L - Centre de Création Chorégraphique Luxembourgeois and POLE - SUD / CDCN - Strasbourg within the framework of the Grand Luxe network. The artist is a member of Tanztendenz München e.V. 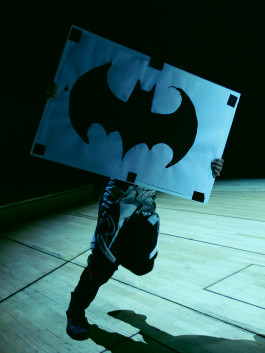 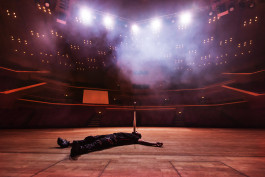 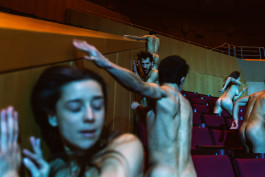 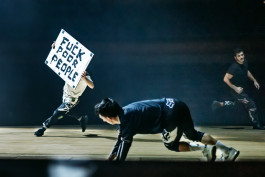 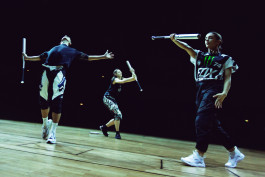 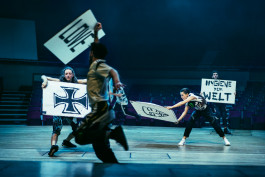 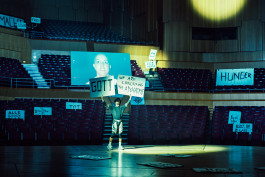 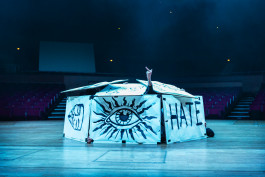 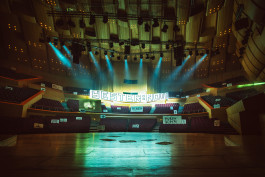 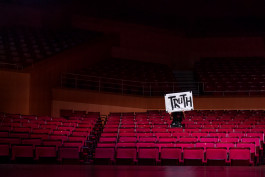 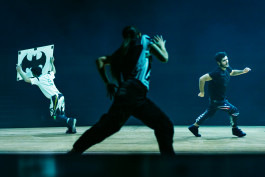 Under the pulsating sound mix by Jonas Friedlich, Ostruschnjak has congenially fused an extremely strong team. They stomp, they run, and shed their clothing, layer by layer. The further the bustle progresses, the further the arms and legs bursting with energy, the expressive faces and the bodies wrapped in all-round sports jerseys covered in comic-themed prints work their way onto the actual stage. Driven with every fiber by an urge and a vibrant desire to express a wide variety of opinions, lifestyle affectations and contemporary posts...

It is the protest of the year, the streamed world premiere of Moritz Ostruschnjak's “YESTER:NOW” – absurd and realistic at the same time. (...) The motto is unmistakably cut & paste. Cartoon characters flicker across a screen in the back, later on prominent historical, political and cultural figures can be seen. (...) All of it is blended iridescently. The viewers get a feeling of how our highly complex world is reduced to catchwords and thereby dangerously simplified.

This tap-danced, hip-hopped, street-danced “YESTER:NOW” also touches on the topics of propaganda and violence and sustains general statements – held up on cardboard signs marked with contradicting, polyphonic slogans – in protest against nothing specific but everything in general. Ostruschnjak stages a collection of excessive offenders by conviction, equipped with elements of a ubiquitous pop culture in the prefabricated templates of traditional as well as contemporary ideologies – YESTER:NOW.

The cardboard signs that the dancers conjure up from everywhere and carry around, place on the stage or set up in the hall, seem to confirm the ambivalences contained in the title of “Yester:Now”. From a Hitler smiley to a peace sign, from the insult “son of a bitch” to the demand “lower rents”, from the cynicism “welcome cheap workers” to the self-affirmation “we’re the good guys”, from the invitation “follow your leader” to the neoliberal misanthropic slogan “fuck poor people” – it’s all there. And yet, this marvelously danced performance, ingenious down to the last detail, does not seem arbitrary at all. Rather, it seems to be the testimony of great helplessness. Where will this journey of mankind lead to? Who can answer that question in these times? But one thing is undeniable: art will survive. If it is as topical as Moritz Ostruschnjak's choreographies.